I met many travelers at the very sociable hostel in Doolin, the most memorable of which was a group of four Italians who had rented a car.  After going for drinks and very animated conversation, I discovered in our group of 5, I was the only one who didn’t smoke and only one of the girls was trying to quit, so she stayed in the pub with me.  Luckily, she was the only one in the group who didn’t speak English, so we somehow managed to have a conversation using the few English words she knew and me trying to recall the Spanish I learned in school.  Somehow, it magically led to me learning the word ‘polipo’, or octopus.  This quickly became my favorite word in Italian and still tops my list.

They were, as most Italians are, great company, so I joined them to the Aran Island of Inishmore for the night and spent the next day exploring the island by bike.  After barely catching the ferry back (Italian time is not punctual, but makes it very memorable), we hopped in the car they had rented and flew down the road at lightning speed, singing opera, cartoon songs or whatever song they knew.  It was wonderful.  They dropped me at a hostel in Westport, in the very northwest part of Ireland and we said goodbye, exchanged emails and parted ways.

All by myself again.  But even more now because I was the only person in the nunnery-turned-hostel.  It was a shock at first, but turned out to be really nice to have space to relax after being with so many people.  I’ve found that travelling by myself, I’m never alone.  People think I’m alone or that I must get lonely, so they spend time with me, or add me to their group, but that keeps happening and pretty soon, my time on trains and in the shower are the only times when I’m really by myself!  I love it, but it’s very important to be anti-social a little and take time for myself every once in awhile.  This was a great opportunity that the universe created for me because I was too ‘green’ of a traveler to recognize I needed it. 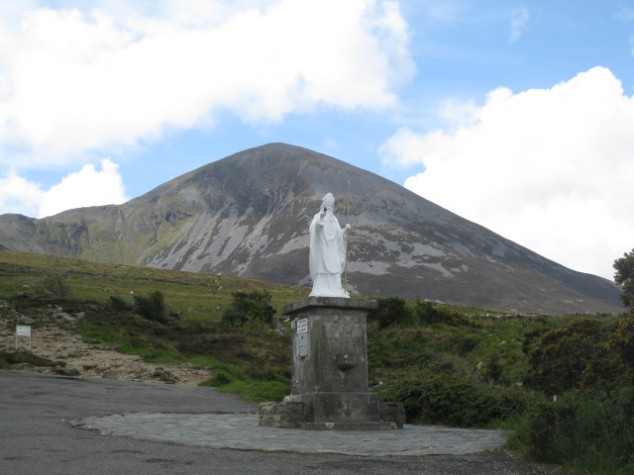 Westport is a few kilometers from the 2,507 feet tall (764 meter) Croagh Patrick.  It is said that this is where Saint Patrick expelled snakes from Ireland (most likely, there were never snakes to start with, but I guess this means he was successful).  Once a year, about 15,000 pilgrims hike up the mountain, many barefoot.  I had a hard enough time going up with shoes on because of all the loose rock and steep inclines.  I cannot imagine the devotion it would take to do it barefoot.  Props to the pilgrims!

After my exhausting hike, I said farewell to Ireland in a way many travelers explore the countryside: by thumb.  For the first time in my life, I hitchhiked.  I had heard successful and encouraging stories from many travelers at hostels in Ireland, but I was a little nervous to do it myself.  But, I think faith must be put in people and by putting yourself out there, you open the doors to many new, wonderful, enlightening experiences.  I had just that.

The first person to pick me up was a single gal in her 40s with her little dog in the back of her van.  She was very nice and told me (just like they all do) to be careful.  I thanked her, she pointed me in the right direction and made sure I knew the cities to pass through and she wished me luck.  And luck I got!  The next car to pick me up was a young couple and they were very intrigued about my trip.  They told me they could drop me at a good spot to continue north to Derry, Northern Ireland, but they invited me over for tea and biscuits (cookies to you Yanks) and a toilet break, so I accepted and instantly became a fan of hitchhiking.

Everything in life can be done inside a box.  You can live life the way you are and never change.  You can be afraid of different things and not be force to do them and be just fine.  Or, you can take a risk.  You can travel with people you’ve just met.  You can climb a mountain alone.  You can get in a car with someone you don’t know.  By taking these risk, you make yourself vulnerable and in most cases, people take care of you.  Most of the news we hear reinforces ideas that people cannot be trusted and if you don’t know someone, they will hurt you if they can.  This is something I have found to be completely untrue.

I believe that most people are good and want to help you however they can.  Maybe it’s because I’m female or because I’m traveling alone or because I’m a foreigner, but not one person took advantage of me in a way I noticed on my trip.  In hitchhiking, this couple invited me, a stranger, into their home for tea.  In Romania, one man that picked me up bought me a drink and candy at the petrol station.  Hitchhiking from Budapest to Istanbul, the truck driver that picked me up paid for all my food, tea and coffee for the two days it took to drive to Istanbul and he never expected anything in return.  If you open yourself to other people and see the best in them instead of fearing the worst, the experiences you have will be so much richer.  Don’t be forced to do anything you’re not comfortable with, but do look for the best in people and the best in them will shine through!

I had an amazing month in Ireland and met many new friends.  It was a great place to start my trip, both culturally and lingually.  If I had to do anything different, I would have moved a little faster because after one month of green hills and white sheep.  It was getting a little old and the next portion of my trip was to even greener and sheepier Northern Ireland!  But I would never trade the friends I met, the music I heard, the beer I drank nor the hitchhiking experiences I had just to shorten that portion of my trip.  In the end, it was all worth getting tired of hills and sheep!

4 thoughts on “Props to the barefoot pilgrims!”