France was certain to be a big change from Spain. I decided I would celebrate the French joie de vivre (joy of living) was by treating myself to a hostel in the center of Carcassonne, a hilltop fortified town in the south of France. While most tourists stay in the ‘ville basse’, the lower, modern town, I was staying in the Cité de Carcassonne, the actual historic fortified part of Carcassonne and a UNESCO World Heritage Site. It’s strange, but while tourists come to Carcassonne to see the Cité, they don’t take the opportunity to actually sleep there. It would be like visiting San Francisco, but sleeping in Oakland. You are there to visit San Francisco, but for some reason you forgo the option of actually sleeping there. The hostel was beautiful, with a peaceful backyard (not what you expect in a small touristic town), plenty of space to relax and easy access to everything you’d want to see in Carcassonne.

During the day, the Cité was crowded with tourists, but after they all trudged down the hill to their hotels, we had the fortress to ourselves. In a way, the Cité is a living village in the modern city of Carcassonne. You still see sheets hanging to dry in the narrow lanes and little old ladies sweeping their entryways. At night, it was a very real place that transported you back centuries.

Views from the fortress walls were amazing and one night on my walk back from a stunning sunset, I noticed there was an outdoor concert in two hours. It looked interesting and after seeing my favorite composer’s name (George Gershwin) I bought a ticket without looking at the rest of the poster. I returned an hour later and sat down eagerly in the medieval amphitheater. The performance began with two amazing pianists playing Gershwin and then continued on to play music from West Side Story, by Leonard Bernstein, my other favorite composer (I refuse to choose one over the other for fear the other will be jealous!). What a treat. It was way more than I could ask for or expect. I returned to the hostel a very happy lady.

Days later, I managed to find a last-minute CouchSurfing host in Avignon during the Theater Festival. Avignon is beautiful by itself, but with the festival, it’s truly magical! Street performers giving shows in every square, actors advertising their shows in crazy costumes on every corner and musicians playing their latest and greatest in traffic-free roundabouts. It was luck that brought me to Avignon and the atmosphere was phenomenal. 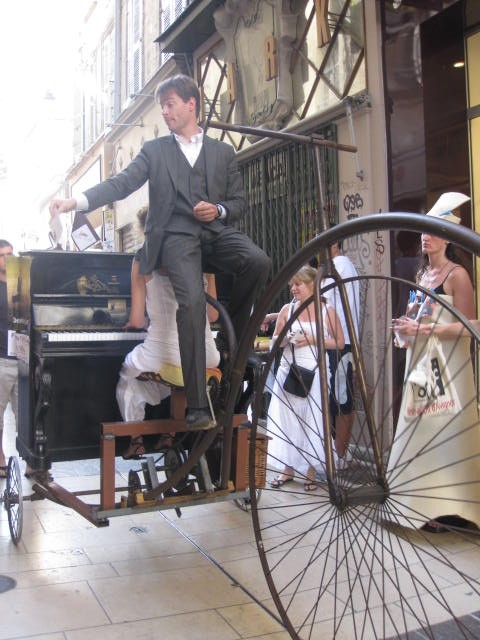 The only part I didn’t enjoy in Avignon was my sweet CouchSurfing host taking me to her favorite restaurant for tartare- raw, finely chopped meat mixed with a few vegetables and spices. Imagine uncooked meat loaf. This was the ONLY meal my entire trip that I did not enjoy. I’m sure it was the best tartare in town, but I was very very very glad I had filled up on our cheese and meat tray appetizer. When the waiter took our plates away, the chef came out and asked if there was something wrong with the tartare since I had only one or two bites. I gave him an apologetic eye and my host translated it into ‘the tartare is wonderful, but she is American’ and the chef gave a chuckle, an understanding smile and a friendly pat on the back. At least I’m not the only American leaving tartare on my plate in Avignon!

From the Theater Festival, I headed north to Lyon, the city of lights. Every winter, Lyon has an illumination festival and the whole city is bathed in a rainbow of lights. I had a hard time imagining this because in the summer, the city is already lit from every angle with every color imaginable. To imagine it more beautiful is difficult, but the French and their joie de vivre- I’m sure they would find a way to enjoy it even more! The city is beautiful and felt laid-back and un-touristic. With a Monaco beer (amber beer, grenadine syrup and lemon-lime soda) in hand sitting on a péniche, a stationary riverboat bar, I couldn’t help but relax and soak in the southern France lifestyle. It was a wonderful precursor to my life a few days later in crazy Paris.