‘Go Canucks! Go!’ is what I was thinking a few weeks ago. No, I’m not Canadian, but visiting Vancouver on a hockey game day meant I had to cheer for the Canucks in their play-offs. I don’t really care about sports or even who wins. As long as it’s a good match, I’m fine with it. But while traveling, sometimes watching a sports match is the most authentic and unique cultural experience you can have! Just be sure to cheer for the right team.

Confederation Cup from London, UK: Brazil v USA
My European football craze experiences began in a crowded Brazilian dance club in London. It was a normal night- everyone was dancing and having a good time. I was out with some friends and expected the usual. Well, that was not going to happen. All of the sudden, the song stopped and all we heard was ‘GOOOOOOOOOO-L’. Yes, our Brazilian dance club turned into an auditorium with dance floor seating and a projector was set to the Confederation Cup football match (Americans, read: soccer game). I wasn’t too bummed about not dancing that night because it seemed everyone was really excited about the match. We decided to stay and took a seat. I was actually kind of excited, mainly from the buzz from all the Brazilians around me. The the color drained from my face. They were playing the USA. Ummm…. ok… I’m Canadian tonight! Go Brazil!?! 🙂 Luckily, Brazil beat the US 3-2. Thank god.

Football match from Pompeii, Italy: Roma v Napoli
When visiting Pompeii, Italy, my host invited me to watch the Roma v Napoli match. This is a huge thing match in Rome and Naples and since we were just 15 miles (25 km) southeast of Naples, it was going to be on every TV. I was planning on spending the day exploring the ruins of Pompeii, but I was convinced that I could just spend the morning there and then they would pick me up in the afternoon for the match. Ok, Pompeii is massive, but watching an Italian football match with passionate fans is epic and cannot be missed. Pompeii has been there for for over 2,000 years and it’s not going anywhere! The match was a tie but my heart was won over by a room full of passionate Italian fans. 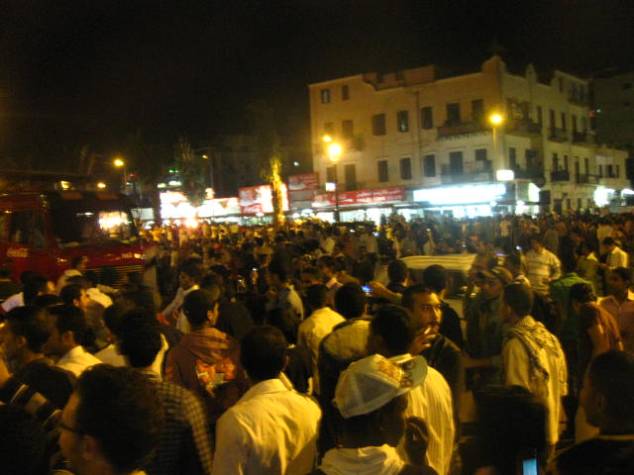 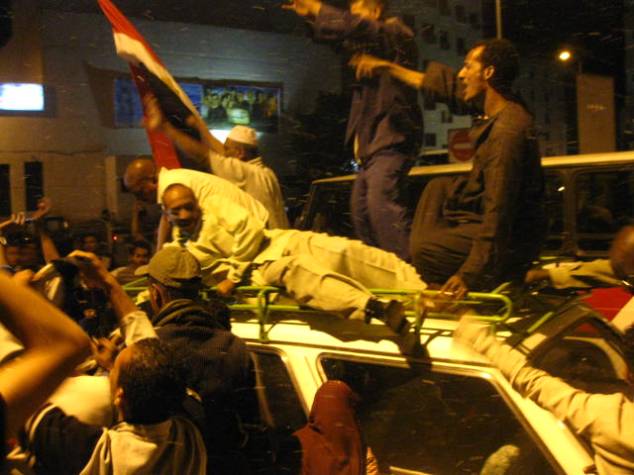 World Cup Qualifiers from Aswan, Egypt: Egypt v Algeria Take One
I happened to be in Egypt when they were playing Algeria for the World Cup Qualifiers. Instead of being in Cairo, where the match was going to be played, my friend and I were on a train down to Aswan, in the south, arriving on game day. No one else was interested in watching the match, so I went to find a TV in a cafe to watch by myself. Not a difficult thing to do. I settled on a cafe with two television (one normal, one pink-tinted) and about 30 Egyptian guys. I ordered some food (the easiest haggling I’ve had since the waiter was preoccupied by the match) and settled down for a win. As a blonde-haired, blue-eyed, fair-skinned girl, I often got unwanted attention in Egypt, but I have never felt more ignored. In the cafe full of 30 Egyptian guys, there were 30 sets of eyes set on the match. Egypt won 2-0 and a party (looked more like a riot, but with smiles) broke out on the main square. Apparently bug spray and a camping stove flame makes a huge torch and you can fit 20 people in the bed of a pickup truck.

World Cup Qualifiers from Dahab, Egypt: Egypt v Algeria Take Two
A few days later, Egypt was playing another match against Algeria. They had to win this and then one more to qualify for the World Cup. If Algeria won this one, Egypt was out. Sadly, Algeria won 1-0 and the TV were set off and abandoned before the final whistle. I don’t really care about football, but I felt really bad for the Egyptians I was watching with. They seemed like a kid whose puppy had just died. The streets were quiet, the shops were empty and the TVs were ignored. Their football team had betrayed them and they were pouting big time. I chose not to bring this up with any Egyptian the next day. Just forget it happened and move on.

World Cup in Tuscany, Italy: Italy v Slovakia
I spent the summer in Italy and the family I was working for was very into the World Cup. Of course they were- they’re Italian! The family was following the matches religiously. The matches were usually on over dinner and while TV was usually forbidden during meals, someone was sent every 10-15 minutes to check the score on the muted television. Don’t want to eat? Ok, just sit in front of the TV and give everyone else updates while they’re eating. Italy did pretty well at the start, but ended up being booted by Slovakia when Italy lost 2-3.

Watching sports match in a foreign country is a unique experience to have. I never watched a live match and I never even paid to watch anything. If a country is passionate about a sport, it will be shown in cafes, restaurants and homes. Maybe you’ll even be invited to watch with some passionate fans! If you get the opportunity, take it! Even if you’re like me and doesn’t really care about sports, watching a match gives you an interesting perspective into the culture and you’ll remember it forever!