In the small village of Theth, in the northern Albanian Alps, the houses are made of stone, the sheep are herded (not fenced in) and the bread is baked fresh everyday.

It’s no surprise in this remote part of the mountains that neighbours come together to help each other – whether it’s asked for or just assumed.

I experienced this first hand when a storm passed through the mountain valley where Theth lies.

We could see it coming – the clouds funnelled into the valley all day – but we had no idea how strong it was going to be.

By mid-morning, rains had flooded the river. Where I had stood to wash my clothes in the river just a few days earlier was now knee-deep in muddy water. Luckily, the village sits above the river enough that no houses were damaged by the river.

New waterfalls sprang to life all over the valley, feeding into the rushing river even more.

A tree uprooted by the storm

Winds whipped through the valley. Branches landed far from their trees. The force of the wind was so strong that trees were uprooted in soil that was now soaking from the rain and the flooding river.

The already limited power went out.

We watched in awe from the safety of our home.

The kitchen was smoky from the winds pushing down the chimney. As the fire was the only way to cook food, bake bread and stay warm, we had no option but to keep the fire going and just deal with the smoke.

The roof coming off during the storm

In the afternoon, we noticed one neighbour’s roof shaking. Slowly, it peeled off, piece by piece. Beams were left exposed and rainwater soaked everything inside.

The storm continued on into the evening, rattling windows and howling down the chimney.

By morning, it was eerily quite.

The following day, we explored the new temporary waterfalls, walking through muddy trails and crossing the river carefully.

Walking from one house to another, it was common courtesy to pick up branches blocking the trail and moving it out of the way.

We found sections of the red roof a football field’s distance away.

Just a few days after the storm, men from a neighbouring village (relatives of the lady who lost her roof) came with roofing material and building tools. They would replace the damaged section of the roof and not ask for any money; only food, shelter and raki, Albanian liquor, while they worked. 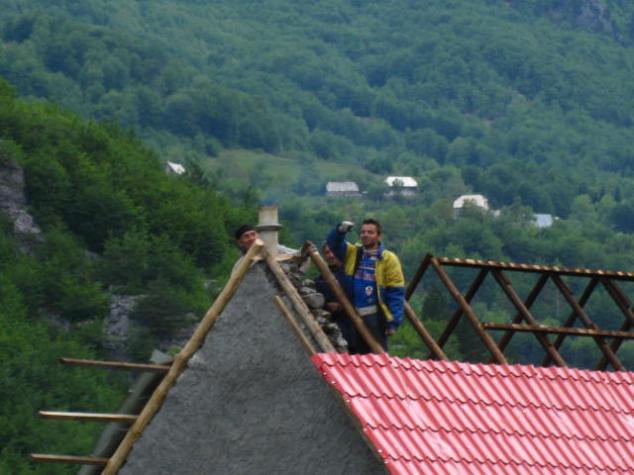 Working on the roof

The roof repair began as quickly as the storm had – raki flowing freely and fresh bread always baking.

Evenings were spent in animated conversation by candlelight over glasses of raki, bottles of wine and dinners that lasted hours.

It was truly a group effort, even reaching beyond the village. There had been no meeting to organise things. No supervisor, no one in charge, it seemed. It just worked. Everyone came together, saw where they were needed and stepped in to help.

Raki for the workers

It all seemed to work out well.

Most of the time, the sun was shining, raki was being carried upstairs to the workers, someone could be heard laughing and by the end of the week, the extra company seemed more like honoured guests than visiting workers. 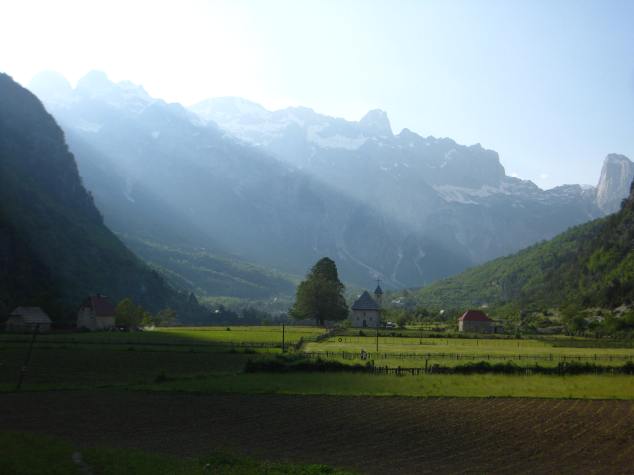 It was great to see the community coming together so naturally after such an event. No doubt the neighbouring villages had their own damages to clean up, but priorities were set and the roof in Theth was repaired quite quickly and seamlessly.

For a week in Albania, I got to see the village of Theth collectively raise a roof.

Check out my storm-free posts about Albania here.

5 thoughts on “It takes a village to raise a roof”